Calcium signal plays a key role in the cellular activity. Even subtle changes of the intercellular calcium concentration can be keenly captured by the Ca2+-sensor proteins and consequently initiates the specific physiological responses. KChIP3/DREAM/Calsenilin (KChIP3 for short hereafter) is a Ca2+-sensor protein highly expressed in the nervous system, which belongs to the neuronal calcium sensor (NCS) family. KChIP3 is distinct from the other NCS proteins, which shows the remarkably multifunctional property. It can regulate the gene transcription through binding with the downstream regulatory element in the nucleus, interact with presenilins in the cytoplasma and modulate the channel function of Kv4 on the plasma membrane. The multiple names reflect the pleiotropic functions of the protein.

Previous studies indicated the important roles of spinal and brain KChIP3 in pain modulation and learning and memory. Recently, lines of evidence show the presence of KChIP3 in the primary sensory neurons of dorsal root ganglion (DRG), implying its potential role in sensory processing. However, detailed studies are needed to elucidate its role in the periphery nervous system. In the present work, Zhang and Wang’s lab investigated the function of peripheral KChIP3 in pain modulation through both in vitro and in vivo studies.

KChIP3 protein is colocalized with the calcium permeable TRPV1 channel, a critical molecule involved in peripheral thermal sensation. Furthermore, there is direct binding between KChIP3 and the intracellular N- and C-termini of TRPV1. Subsequently, the plasma membrane localization of TRPV1 was decreased and calcium-influx through the channel was diminished by gain-of-function of KChIP3. The transmembrane peptide TAT-31-50, generated according to the key sequence mediating the KChIP3-TRPV1 interaction, significantly inhibited the TRPV1-mediated calcium influx. Intrathecal injection of TAT-31-50 alleviated the thermal hyperalgesia and improved the abnormal gait in the complete Freund‘s adjuvant-induced inflammatory pain model in rats.

Application of TAT-31-50 in the capsaicin-induced pain model in rats through intraplantar injection significantly alleviated the spontaneous pain and thermal hyperalgesia behavior. Moreover, TAT-31-50 showed the similar analgesic action in the kcnip3-/- rats generated using the CRISP/CAS9 technique. Thus, the analgesic effect of TAT-31-50 is independent of the endogenous KChIP3. In summary, the present studies reveal a novel binding partner of KChIP3 and show the inhibitory effect of KChIP3 on the plasma membrane localization of TRPV1. Additionally, the constructed transmembrane TAT-31-50 peptide may be served as a drug candidate for pain relief in future. 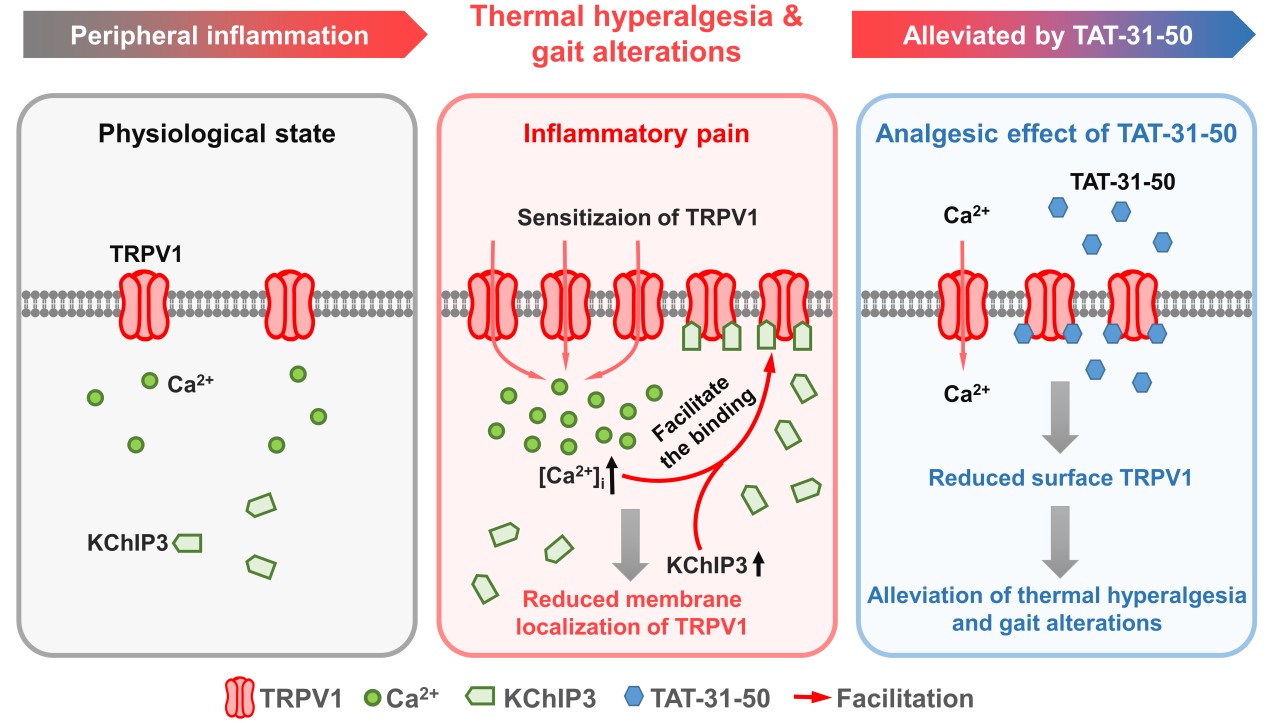