On 3rd January, a research article “Attention Priority Map of Face Images in Human Early Visual Cortex” by Prof. Fang Fang’s research group was published on Journal of Neuroscience. This article highlights the key advances in investigating the neural correlates of attention priority map of natural stimuli gained by the combined use of functional magnetic resonance imaging and eye tracking. Ph.D. candidate Ce Mo and Dr. Dongjun He contributed equally to the work, and correspondence should be addressed to Ce Mo or Prof. Fang Fang.

Visual processing is one of the most fundamental and important cognitive functionalities of human brain. However, the capacity of visual system is limited in contrast to the large amount of visual input information. Hence, effective selection mechanism must be employed by visual system to prioritize the neural resources to the most behaviorally relevant part of visual information. Computation theories of attention posit that attention selection relies on a topographic representation formed on the basis of physical salience and task relevance, known as attention priority map. Attention priority map determines how neural resources are allocated and guides ensuing perceptual behaviors. Previous findings have identified priority map-related neural activities in multiple levels of visual system, including primary visual cortex (V1), intra-parietal sulcus (IPS) and frontal eye field (FEF). However, these studies involve only artificial stimuli composed of simple features. So far, there is no neural evidence of priority map of natural stimuli.

The key to investigating the neural correlates of priority map is to examine the consistency between the topographic stimulus representation and the pattern of perceptual behaviors, i.e. behavioral relevance. However, this is complicated by the complexity of natural stimuli representation and the difficulty of behaviorally characterizing the attention priority distribution using traditional psychophysical approaches. In the present study, the researchers asked the participants to perform a simple image matching task on three types of facial stimuli (upright, inverted and phase-scrambled) (Figure 1). They behaviorally characterized attention priority distribution as the spatial pattern of first saccadic targets after stimulus onset. They then reconstructed the topographic representation of facial stimuli in early visual cortex (V1, V2/3) based on the population receptive field model by Dumoulin and Wandell (2008) and measured the behavioral relevance by computing the area under Precision-Recall curve (Figure 2).

They found that the reconstructed representations of facial stimuli were highly consistent with the first saccadic target pattern, suggesting that priority map of complex natural stimuli could be found in early visual cortex. In V1, no significant difference in behavioral relevance was found between the upright and the inverted face representations, suggesting that image configuration has little effect on attention priority representation in this area. This is probably because neural activities in V1 are mainly involved in encoding physical salience (Zhang et al. 2012). More importantly, in V2/3, representation of upright faces is more behaviorally relevant than that of inverted faces, indicating a strong modulation effect of image configuration on attention priority in extrastriate visual cortex. The present study is among the first to unravel the neural mechanism of priority maps of natural stimuli. Moreover, it also reveals another critical factor that constrains attention priority maps besides physical salience and task goal relevance, namely the spatial configuration of stimuli images, which extends the classical attention priority map theory and advances our understanding of attention mechanism.

The present study is supported by national Natural Scientific Foundation of China (NSFC), Ministry of Science and Technology of China (MOST) and Peking-Tsinghua Center of Life Sciences (CLS). 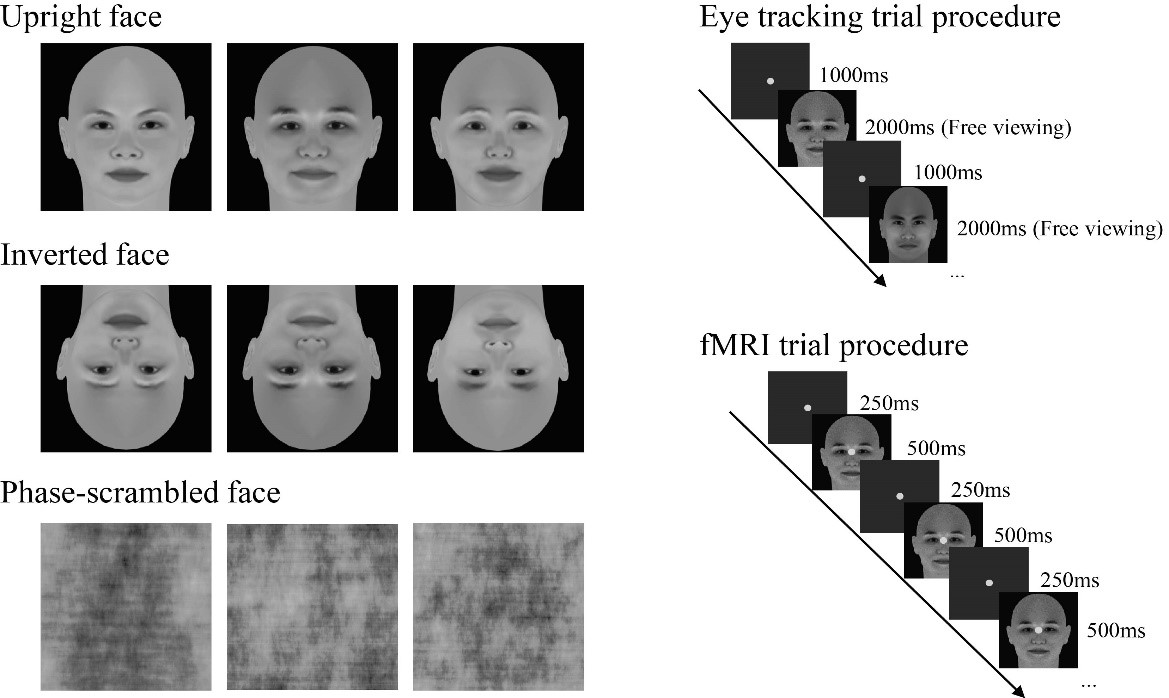