The formation of the neural network is a very complicated process. During the brain development, neurons need to establish connections that extend axons to contact each other. These neurons form a loop between the brain and the target tissue through which chemical and electrical signals are transmitted. This process mainly depends on the on the growth cone which locates at the top the axon. These growth cones can perceive the environment, determine the location of the target and grow towards it, allowing the axon to be steered in the correct direction and eventually reach the target cell. However, how axons perceive and determine the correct direction of growth and the signal link between the growth cones and axons remains a mystery.

On March 1, 2018, Wang Jiahuai, Zhang Yan and Xiao Junyu from the Peking University School of Life Sciences jointly published a paper entitled "Structural basis for Draxin-modulated axon guidance and fasciculation by Netrin-1 through DCC" in the Neuron Journal. This study, for the first time, reveals the mechanism by which draxin/netrin/dcc complex modulates axon guidance and fasciculation.

DCC was discovered as a marker for colon cancer cells firstly and was later confirmed to be a receptor on the surface of neuronal cells. In the early stages of the nervous system, DCC connects each neuron properly to establish a neural network. In the early development, axon grows which elongates under the guidance of Netrin-1 and some other signaling molecules to the target. They reach the destination and establish synaptic connections with neurons that they should connect. DCC is the main receptor of netrin-1, which is the interaction between netrin-1 and DCC on the axonal surface, which leads axons of neurons to extend to the right direction.

In this work, researchers presented structural snapshots of Draxin/DCC and Draxin/Netrin-1 complexes, revealing a triangular relationship that affects Netrin-mediated haptotaxis and fasciculation. Draxin interacts with DCC through the N-terminal four immunoglobulin domains, and Netrin-1 through the EGF-3 domain, in the same region where DCC binds. Netrin-1 and DCC bind to adjacent sites on Draxin, which appears to capture Netrin-1 and tether it to the DCC receptor. In 2014, the Neuron paper reported that netrin-1 could also combine with DCC directly, so DCC/Draxin/netrin-1 / DCC appeared to be a bridge, connecting DCCs on two axons. In other words, DCC, the single transmembrane molecule, can promote the clustering of neurons and axon guidance by the combination of netrin-1 and Draxin.

Axon guidance is a very mysterious and complex issue in neuroscience. On the basis of previous studies, Zhang and Meijers groups are still studying further how draxin modulates neuronal clustering, how other receptors bind to Netrin-1 and intermediate the selection mechanisms, etc. 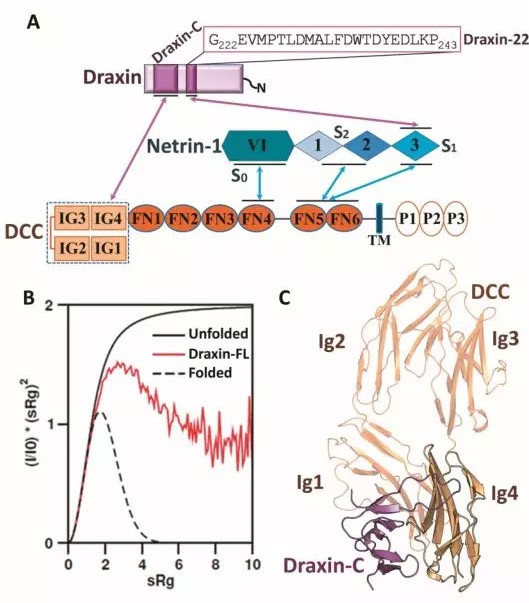 This research project was jointly completed by Zhang Yan and Xiao Junyu research groups of School of Life Sciences in Peking University in collaboration with adjunct professor Wang Jiahuai Laboratory of Harvard Medical School and Meijers Research Group of European Molecular Biology Laboratory (EMBL). Liu Ying, Tuhin Bhowmick, Liu Yiqiong and Gao Xuefan are co-first authors of this article. Peking University is the first author affiliations. This work was supported by NIH grant and funds from the Peking-Tsinghua Center for Life Sciences, NSFC Major Research Grant, the National Science Foundation of China (NSFC) Fund for Distinguished Young Scholars and by the National Science Foundation of China and the National Key Research & Development Plan.